Our laboratory uses the equipment to undertake organic compounds analysis of different samples (air, filters, biological tissues, etc.). This kind of analysis can be applied for a wide range of disciplines, mainly workplace, environmental and clinical samples.

PAHs are a group of chemical substances characterized by being composed of carbon and hydrogen atoms, grouped into aromatic rings containing five or six carbon atoms. They are produced during the incomplete combustion of coal, oils, gases, wood, household waste, and other organic substances. They can be found naturally in petroleum, coal, tar deposits and as products of the use of fuels, whether fossil or biomass. As pollutants, both in the environment and at the workplace, they have raised concern because some of them have been identified as carcinogens.

The Laboratory of the National Institute for Silicosis undertakes the analysis of PAHs by Gas Chromatography / Mass Spectrometry (GC / MS) in filters and adsorbent tubes at trace (ppm or μg / g) and ultratrace (ppb or ng / g) levels.

VOCs are organic substances that pass easily through the gas phase. They are produced during fuel combustion and are also released by solvents, paints and other products. From an environmental point of view VOCs are key substances for their contribution to the photochemical "smog" by reacting with other atmospheric pollutants and sunlight. Exposure to high concentrations of some VOCs in humans can cause harmful effects on different organs. In addition to this, there is evidence that benzene is a carcinogenic substance in humans. 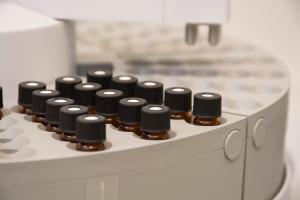 Formaldehyde is a widely used substance at different industrial processes and health centers. However, because of its classification as carcinogenic (category 3 in the European Union, category 2 according to Regulation 1272/2008 and category 1 according to the IARC) and also because of its irritant power there is an attempt to eliminate it or, at least , to reduce workers exposure. According to this, the analysis of formaldehyde in workplace is the key tool for the control of the exposure.