The growing use of new materials in industrial applications has led to increase the risks which both workers and the population are exposed to. Amongst them, the inhalation of nanoparticles is one of the future challenges in the prevention of respiratory diseases, considering their great variety and the diversity of the generating sources. Its effects on health are diverse.

The behavior of particles follows a defined pattern. As its size decreases, the specific surface area increases and therefore its reactivity. Due to this, nano-sized particles can cause adverse health effects other than those caused by non-nano sized particles with the same chemical composition, since they can interact in the body in a different way. (source: INSST) 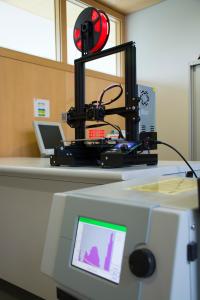 Although the mechanisms of toxicity are not analyzed enough for most nanomaterials, the most important adverse effects observed in vivo studies, tested in animals at high doses, are manifested in the lungs and include, amongst others, inflammation, damage in the tissues, fibrosis and generation of tumors. Likewise, cardiovascular effects have also been described.

Some nanomaterials, including elemental carbon and titanium dioxide, have been classified as "possibly carcinogenic to humans" (group 2B) by the International Agency for Research on Cancer (IARC) on the basis of animals testing.

It has been shown that carbon nanotubes, of length, diameter and biopersistence comparable to those of asbestos, can induce similar effects, involving inflammatory and fibrotic reactions. (source: INSST)

The INS has technology and experience enough for carrying out nanoparticle exposure studies that include quantification, surface area measurement, collection and identification.